Shigeru Tanaka laboratory studies neural phenomena to understand the function of the brain.

I have obtained my Ph.D. in physics. Specifically, I theoretically studied rotational excitation of molecules inelastically scattered from metal surface, so-called rotational rainbow scattering, in the master course. Then I studied the surface-roughness induced electronic energy level statistics in metallic fine particles in the doctor course.
After obtaining my Ph.D., I moved to the theoretical neuroscience. Mathematically formulating synaptic plasticity, I built a self-organization model that explains the formation of functional columns of neurons in the mammalian primary visual cortex, and successfully reproduced those experimentally observed structures using computer simulations. Particularly, taking into account lagged and nonlagged types of neurons in the lateral geniculate nucleus, which have already been observed experimentally, I have succeeded to reproduce map structures about not only orientation selectivity but also direction selectivity of motion.
In addition, I found that the space spanned by the preferred orientation and receptive field phase of visual cortical simple cells is topologically equivalent to the Klein bottle K2 (Fig. 1), and demonstrated that singularities appearing in orientation maps can be classified into different types using homotopy theory. Furthermore, the direction selectivity was found to be equivalent to the Möbius band surrounding the Klein bottle (Fig. 2). Based on this, I revealed a geometric relationship between line discontinuities of direction maps and point singularities (pinwheel centers) of orientation maps: the odd number of direction discontinuity lines start or terminate at orientation singularity points. 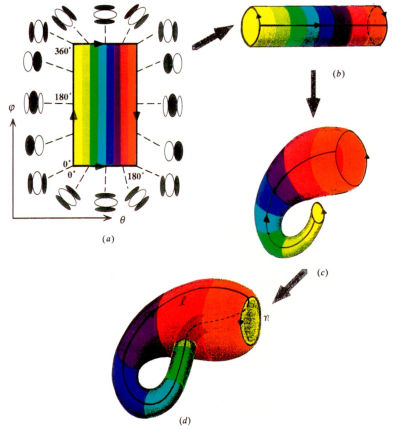 Fig. 1 How to construct the Klein bottle from symmetry properties of receptive field profiles of simple cells in the primary visual cortex. For more details, refer to Tanaka, S. Proceedings of Royal Society Lond B, 261: 81-88 (1995).

In order to demonstrate my theoretical results experimentally and, I started intrinsic signal optical imaging of the cat visual cortex in parallel to the continuation of theoretical research. The observed geometric relationship between orientation singularity points and direction discontinuity lines agreed exactly with the mathematical predictions. Very recently, I extended the self-organization model to be able to apply to the 3-dimensional visual cortex taking into account the depth dimension. Computer simulation of the 3D self-organization model showed that orientation representation was disrupted and did not exhibit columns penetrating from the pia to white matter, in curved parts of the gray matter. The singularities in the orientation representation emerged as line singularities, which often warped and exhibited U- or V-shaped curved lines linking clockwise and counterclockwise pinwheel centers on the cortical surface. The plausibility of the simulated structure was demonstrated by functional magnetic resonance imaging (MION-enhanced BOLD signals) of the cat visual cortex, collaborating with a research group of Pittsburg University.

It has been known that blobs stained with cytochrome oxidase exist being aligned along ocular dominance bands in the primary visual cortex of macaque monkeys. I reproduced the observed regular geometric structure using computer simulation based on the self-organization model.

Since 2002, I launched a project of developmental orientation plasticity of the cat visual cortex. For this purpose, I established a chronic recording protocol and fabricated robustly mountable goggles on the cat (kitten) head for visual experience manipulation. Using these methods, we identified the sensitivity profiles of orientation selectivity in cats and mice. Particularly, we demonstrated that the single-orientation exposure induced alteration of orientation selectivity requires the activation of NMDA receptors, using kittens, in which NMDA receptor antagonist AP5 was continuously infused by the osmotic pump for one week.

For my changes in research fields, please read the interview article in RIKEN BSI News 2005
http://www.brain.riken.jp/bsi-news/bsinews28/no28/interview1e.html