Shigeru Tanaka laboratory studies neural phenomena to understand the function of the brain.

In the mammalian visual cortex, there are functional architectures composed of columns penetrating from the pia to white matter such as ocular dominance columns and orientation columns. I have been investigating the functional architecture of mammalian visual cortex from both experimental and theoretical viewpoints. One of the major targets is to understand developmental plasticity, by which innately established functional architecture can be altered or reorganized by animals’ visual experience. I have been engaged in theoretical studies of activity-dependent self-organization of orientation columns, collaborating with Masanobu Miyashita (Numazu National College of Technology) and Nodoka Wakabayashi (Toyohashi University of Technology) (Figs. 1 and 2). 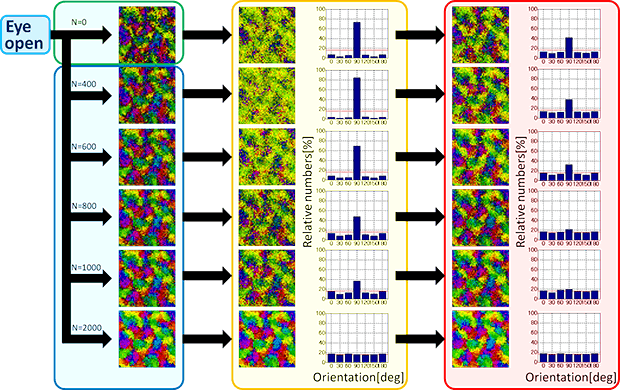 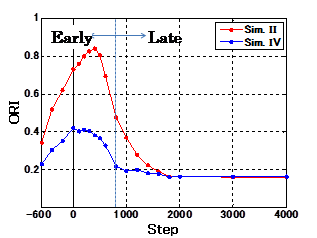 For experimental studies of orientation plasticity, I have established goggle rearing methods for animals (cats, rats and mice) to be continuously exposed to orientation-restricted visual images under a freely moving condition, and improved data acquisition and analysis methods for intrinsic and voltage-sensitive dye signals obtained in optical imaging experiments. We found that orientation columns can be altered dramatically by a continuous single-orientation experience of cats (Figs. 3), rats and mice through orientation-restricting goggles in early life. We also obtained the sensitivity profiles of orientation plasticity for cats and mice (Fig. 4). 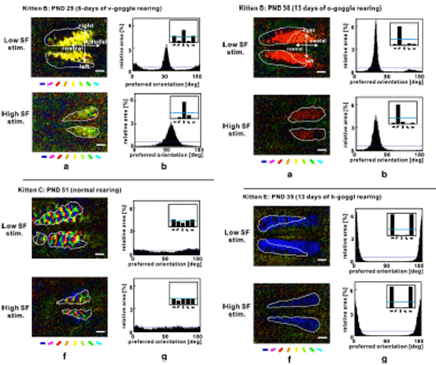 This finding is counter evidence to the notion that orientation columns are robust against visual experience different from ocular dominance columns. These lines of research are important for getting better understandings of the mechanism of how visual perception is accomplished.

Currently, making the best of synergy of theory and experiment, we are investigating the interaction in development between orientation columns and intracortical connections in the visual cortex. We also study the commonality and difference in the mechanisms underlying orientation representation formation in cats and rodents.

I am engaged in modeling neural networks in the prefrontal cortex, basal ganglia and thalamus, which are involved in the working memory task performance and the sequential generation of motor actions. I built a mathematical model of a brain network composed of prefrontal cortex-basal ganglia-thalamus loops in order to reproduce human performance of the 1-2-AX task, collaborating with Ai Yamashiro (The University of Electro-Communications). In this model, we took into account bi-stable resting membrane potential experimentally observed at medium spiny neurons in the striatum and incorporated direct and indirect pathways (Figs. 5 and 6). The direct pathway loops in the model reproduce sustained neuronal activity for information preservation and the indirect pathway loops shut down the activity in the direct pathway for erasing the preserved information, which are triggered by external stimuli. The model successfully showed correct responses to specific orders of symbols presented. 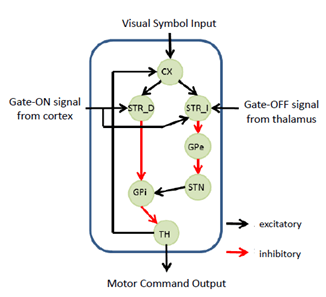 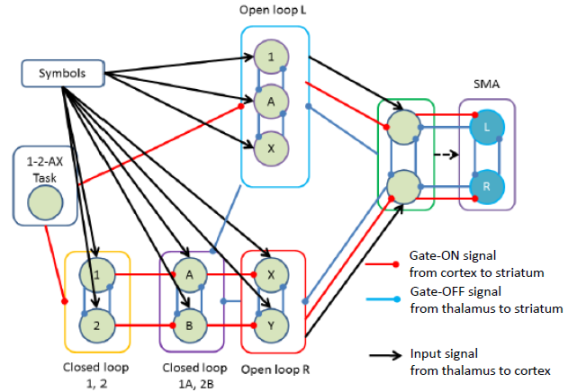